Bago is a small bustling city in Bago Division of Mon origin which had been handed back and forth between Burmese, Mon, and foreign rule. You can look back to its imperial past by visiting the reconstructed Kanbawzathadi Palace, a golden abode originally built in 16th century during a prosperous era. You can also view an interesting assortment of pagodas, most notably, the Kyaik Pun Pagoda in which four gigantic images of Buddhas who had achieved nirvana sit back to back, facing in four different directions. Bago is also visited for the Shwethalyaung reclining Buddha image, the second largest of its kind in the world. 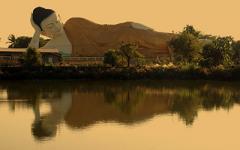