The only other city that comes close to rivaling Bagan's richness in archaelogical sites is Mrauk U, the crown jewel of Rakhine State. The historically prominent city was the capital of the Rakhine civilisation starting from 1431. As the city prospered due to its role as a trading port with Europe and the Middle East, temples, buildings, and pagodas proliferated in which 700 still exist today, with many yet to be excavated. Maneuver your way through the maze like passages of stone temples such as the Shittaung Pagoda where its circular walls are decked with thousands of stone Buddhas. Visit the Palace grounds where stands the remains of what was once the abode of all 49 kings as well as the archaeology museum offering a glimpse into the city's past glory days. 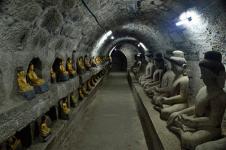